Sex Magic is a powerful force that can radically alter the course of human civilization in most realities in which it appears. This article looks at the various Impact Levels the Magic has on different timelines, from the source of the power, to the final outcomes of its influence.

So, I'm just going to call it, I'm taking the rest of this year off. There's a chance I'll change my mind in a few months, but as it stands, I'm in a hard case of burn out when it comes to writing erotica. I think the last couple years were maybe a little too productive (by my standard), and now the muse needs a break!

Beyond that, as far as writing in general goes, I really want to focus on building my non-erotic work again. I have been struggling with it for years; it has always been substantially harder for me to write "normal" genre fiction, despite that being where most of my writing passion lies. In 2018, I managed to write a web novel, but I have done nothing but flounder since then, and I want to get back on the ball.

One of the reasons I've been as prolific as I have been with my erotic writing, despite it supposedly only being a small part of my creativity, is that sometimes I have just used erotica as a crutch to soothe the manic need to write. Sometimes, after tearing my hair out over my genre writing, I turn to erotica in order to write literally anything just to get the demon out of me. And that, I think, doesn't do either sides of my writing any favors. I end up with unfinished genre stories that get binned, because I bled out the creative fire elsewhere before I could finish them or at least fix what was wrong. Likewise, I end up with unpolished throwaway filler erotica that I could have done more with if I'd actually gone into it with a full passion for that story, instead of using it as a bleed-off for the frustration of a failed project.

So, as something of a self-discipline measure, I would like to give myself a significant chunk of time where that crutch isn't there. If I write anything this year, I want it to be focused on honing my genre work. Maybe nothing will come of it this time, either, but at least I won't just be diverting that frustration into sub-par smut.

Email ThisBlogThis!Share to TwitterShare to FacebookShare to Pinterest
Labels: Notes

Yet another variant of Sex Magic, but one that is substantially more limited in scope. All the wilder, more broadly useful elements of the Magic have been removed, leaving only the most important core aspects: direct psychic control of the genitals and influence over the sexual psyche. As such, this isn’t an especially “new” concept in terms of the powers at play, but it does allow for a very different dynamic compared to the main SMW setting.


This was also initially conceived of as a spin-off from the Omnymphotents, but I think it can work in a multitude of settings; by and large, Phallimagery is intended to be a rare power, mostly unknown by the general population, and thus can easily be “hidden” among a variety of different settings.
Read more »
Posted by Salamando Flames at 5:39:00 AM 4 comments:

It took a considerable amount of self control on Penny’s part to not break out into a grin as she saw the two boys come around the corner and stop dead upon seeing her. They blinked, eyes widening, and jaws dropping a bit as they saw her lean, fit figure stretched out along the pool chair, barely clothed in a white string bikini, her long legs on full display, and her perky breasts barely contained.

Penny, her eyes hidden by large mirrored sunglasses, scoped the two boys out without turning her head. She chose that moment to re-cross her legs at the ankle. She saw Derrick’s eyes zero in on her red-painted toe-nails, and Hank swallow hard as his eyes trailed along the curve of her thighs.

She barely managed to restrain her laugh to only a sly grin as she saw the tents forming in their pants. The idiots were wearing only their swim trunks and weren’t even carrying anything with which to cover themselves.
Read more »
Posted by Salamando Flames at 8:54:00 AM 5 comments:

The world was a vast, dark cloudscape, deep purple thunderheads lit by distant flashes of lightning. Were one to travel into those clouds, they would simply be lost in them until they turned around, and came out into the airy void in the center. But almost no one who came here had a chance to travel around. In fact, they could barely even move. The Demoness who forged this little realm made it for one very distinct purpose: the sexual torment of her human playthings.
Read more »
Posted by Salamando Flames at 3:09:00 PM No comments:

Email ThisBlogThis!Share to TwitterShare to FacebookShare to Pinterest
Labels: Omnymphotents

Devin collapsed back onto the mattress, breathing heavily. Three weeks into this job and he still wasn’t used to being woken up like this. He didn’t think he ever would get used to it. It’s not like he could brace himself for the girls’ teasing when he was asleep.
Read more »
Posted by Salamando Flames at 10:43:00 AM 8 comments:

When I first met her, she was making coffee in my kitchen. I was just coming out of the bathroom, still a bit groggy after having done my morning business. I was, thankfully, off work for the weekend, but I still had trouble sleeping in past six. Years of early rising had trained my internal clock for it.

As I stepped out into the hallway, I heard the sounds of movement, the clink of a mug on the counter, and the tinny beep of the coffee maker finishing up a brew. For a brief moment, in my half-sleep, I wondered why my wife was up so early. Then, as the scent of coffee struck my nose and coaxed me more awake, I remembered my wife and I had divorced last year, and she’d moved to another country since.

My body tensed. I was in just my boxers and an undershirt. My shotgun was under my bed, but it was unloaded, and there was no way I was going to reach it before the intruder could catch me if they came around the corner. My golf clubs, which now served mostly to collect dust, were in the garage. My baseball bat was in the hall closet, but could I reach it in time to use it?

Email ThisBlogThis!Share to TwitterShare to FacebookShare to Pinterest
Labels: Omnymphotents

“You know if we keep doing this, we're going to be late.”

“I'm not seeing the problem.”

“Come on, you know this event is important to me.”

“Ugh. I wish I tied you up before we started.”

“Haha. Much as I would have enjoyed that, there’s a reason I didn’t let you. Now hurry up. You have one minute to finish.”

I picked up the pace as I thrust into my wife. Within another forty seconds, her body tightened, and she let out long moan as she came. I wasn’t quite there yet myself but I was very close. I tried to beat the deadline, but my watchful wife was true to her word. Even as she shivered through the last part of her orgasm she kept an eye on the clock. As soon as that minute hand ticked over to 12, she pushed me away, leaving my cock wet and bobbing in the air.
Read more »
Posted by Salamando Flames at 9:06:00 AM No comments:

Kell opened the door just as Mike was starting to knock. She gave him a smile that didn’t look too forced. He gave her a smile that was somehow both eager, but apologetic.

“Hey, Kell.” He looked a bit self-conscious. She could tell from the way he was hunched over, and how he made sure his jacket hung out a bit from his middle, that he was already sporting a hard-on.

“I was wondering if you wanted to hang out, and, um…”

Kell made a little sigh, turned, and beckoned him inside as she walked back to her living room. “You can play with yourself, but I’d really like it if this visit wasn’t just that.”

“Oh, thank you!” he said, his voice thick with relief. “After last time, you seemed like you were getting fed up.” Despite his words, he was already undoing his belt as he closed the door behind him. He practically raced after her, barely getting himself positioned in front of her couch before his pants fell to his ankles, and he dropped back onto the cushion.
Read more »
Posted by Salamando Flames at 12:54:00 PM 2 comments: 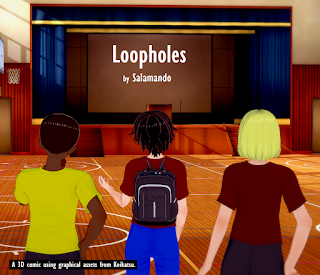 Another 3D comic made with Koikatsu! The longest yet, and I think the most fun so far! Three boys attempt to exploit a loophole in the Anti-Masturbation Spell, but of course, things don't go quite as planned.

The CBZ file can be found here: http://www.mediafire.com/file/uvl0x63pu2tznyr/Loopholes.cbz/file

Sex Magic in this reality is highly limited compared to most other versions, as it only gives a woman direct influence over those men with whom she is physically sexually active, and the side-benefits of the magic are considerably less potent. This thus results in a far less severe shifting in the power dynamic in society. It still strains the relationships between men and women, however, and puts a serious damper on casual sex; no man in his right mind is going to have sex unless he can be absolutely sure he trusts the woman he’s about to put his dick into.

One day, completely out of no where, all women around the world gained the ability to casually transform other people into inanimate objects and back. The objects in question were still aware and still had some form of sensory input, but the power had a variety of interesting effects. Strangely, only women gained this power, and now men must learn to adapt to a world where at any moment, any girl nearby could just casually turn them into a pen, or a shoe, or an earring, or a chair, or any number of other things. But the worst part isn’t even being transformed: it’s the sexual torment that comes as a side effect!
Read more »
Posted by Salamando Flames at 4:25:00 AM 1 comment:

The Boy in the Park 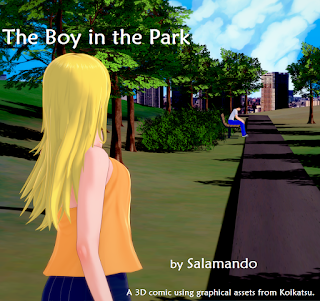 Much thanks to A2TailedFox for patiently hand-holding my caveman brain through figuring these programs out.

As before, this comic uses the CBZ file format, which I'm going to be using from here on out. Download the file here: http://www.mediafire.com/file/bk9rrnrtxltpnjf/Boy_in_the_Park.cbz/file

Out In The Woods 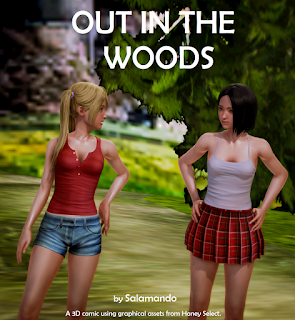 I've decided to put Honey Select to some greater use, and made this quick one-shot comic out of it! I've compiled the images into a cbz file for easier reading. CBZ is a digital comic file that can be read one of two ways:

Download a free comic reader program like ComicRack or Comical. Or download a multi-file document reader that can also read CBZ files. I actually recommend Sumatra PDF over anything else.

Alternatively, you can use Winrar to open up the file and just extract the images into a folder, and view them as a normal set of image files.

The link is here: http://www.mediafire.com/file/5p4o5qdhop7hcei/Out_In_The_Woods.cbz/file